In-water recompression: Good idea? Bad idea? What is it anyway? 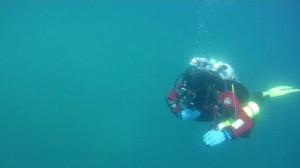 A few weeks ago I came across the following article: Take Me Back Down: One Diver’s “Over The Counter” Remedy For DCIs

If you have any deep diving training at all, chances are the topic of in-water recompression has come up at least once. The concept is simple: Diver gets bent. Diver jumps back in the water to take a second crack at decompression. I’ve seen it many times in diving movies from the 1950’s.

In practice, in-water recompression (IWR) is deadly serious, and all of the discussions I’ve taken part in on the topic have pointed toward the same conclusions. One, that it is generally a bad idea to attempt it, and, two, researchers in Australia and Hawaii are experimenting with IWR and having success with it.

In the article, author Joseph Dituri makes a compelling case suggesting in-water recompression, without any planned protocol, likely saved him from serious long-term injury, or worse.

On the other hand, many experts like Dr. Alessandro Marroni, President of DAN Europe, point out that IWR attempts often have to be aborted for logistacal, or other reasons. Worse, the effort frequently fail to produce the desired outcome. More on the here: In-Water Recompression.

I am no expert. Far from it, but the topic is of great interest to me, since I do conduct deep decompression dives in remote locations. Until recently, I believed that in-water recompression was some far out option that was insane to even think about. Then again, if the symptoms are bad enough, and access to a chamber is days away at best, I’m sure getting back underwater would look mighty inviting to me personally. Mr. Dituri makes a pretty solid argument that it may not be such a bad plan.

I’m definitely not advocating one way or another, but Dr. Kay’s suggestion (DAN article linked above) that it should be standard training for deep, remote diving resonates with me. Personally, if available, I’d definitely participate in that sort of training. I’d buy all the necessary equipment too.

Like just about everything in technical diving, we make our decisions based on the best information available, and at some experts seem to agree that in-water recompression may not be such a bad idea after all… or is it?