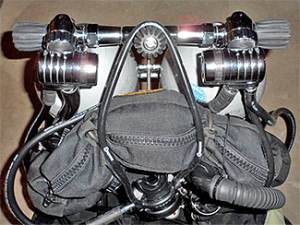 About six months ago, I made a regulator change on my technical rig from Poseidon to Apeks. My Poseidon regs (Cyklon 300’s) are close to 25 years old, and while they’re still exceptionally good regulators, the hose routing sucks, and getting parts has become a hassle. For sport diving I use an Atomic T1 that is spectacular, but titanium is definitely not appropriate for tech since it can’t be used with oxygen levels over 40%, so I sure wasn’t going to try to match that.

So, since I’d be buying a matched pair anyway, I decided to go with the Apeks Tek 3’s. One thing people say all the time about Poseidon is that they’ll deliver A LOT of air, which is true, but I always felt the relatively high cracking pressure made them feel stiff after breathing my Atomic. Down deep, they perform well regardless. At least there’s no perceptible difference that I could distinguish at any “normal” tech diving depths.

Anyway, back to the Tek 3 set. The obvious thing when you start screwing hoses together is that they all rout straight down. This is very cool for making valves accessible, but some divers have complained that this puts a sharp bend in hoses that must cross left or right. I think they’re right, but it’s not that sharp a bend on my setup, and certainly not enough to cause my hoses to wear any faster. I think it depends on your configuration, wing choice, tank position, etc.

All put together, the Tek 3’s look awesome! To me, they look like they could be chromed engine parts on a hot rod as much scuba gear. I couldn’t help but just stare at my rig when I first put it together. I had gotten so used to the Poseidon tangle of hoses, I kept thinking I left something out. So, for anyone with hose routing issues, Apeks is a good choice.

Not longer after, I got to make my first dive using the Apeks Tek 3 set. It was late Summer so even Lake tahoe is around 60 degrees at the surface. Down around 100 feet, it dropped to maybe 50, so it would be a few months before getting into the 39 – 40 degree range. So, I set everything up and jumped in the water. The first thing I noticed is that even detuned, they breathe better than the Poseidons.

Now, months later, I’ve had them underwater a lot, including temperature extremes. Being nearby, we dive Lake Tahoe all year, with water temperatures as low as 39 degrees. If a regulator is going to freeflow, Tahoe is the perfect place for that to happen. So far, that just hasn’t been a problem. The regulators are well sealed to prevent it, and my practical experience has been that it works.

The Apeks Tek 3 breathing effort is consistant with what I’m used to from my top of the line Atomic. Personally, I don’t tend to fiddle with the tuning underwater, but the adjustment is pretty dramatic for those who do. I just dial it back to prevent freeflow on the surface and generally leave it as is. By mid-Summer, I’ll be making deeper trimix dives in the 300+ range, but based on conversations with other Tek 3 divers, I don’t anticipate much change.

I will say that the Apeks XTX50 second stages that are supplied with the Tek 3 are extraordinarily comfortable. The Poseidon Cyklons have always gotten irritating after about an hour in the water. I don’t know if it’s the shape of the mouthpiece or what, but jaw fatigue, while tolerable, isn’t something any of us need to deal with. With Apeks, it’s not an issue. Partly, it’s because the XTX50 weighs practically nothing in the water. Also, the Apeks mouthpiece design has an odd little tab across the top that run along the roof of the diver’s mouth, just above his or her teeth. I didn’t know how I’d feel about that in the water, but in practice, it’s by far the most comfortable mouthpiece I’ve ever taken on a dive.

The bottom line is the Apeks Tek 3 set is an awesome group of regulators, specifically designed to meet the needs of technical divers. The breathing effort is amazing, the cold water performance is top notch, and they are built to last and last. Obviously, there are other exceptional regulators available, but I personally believe any technical diver considering new regs should take a look.