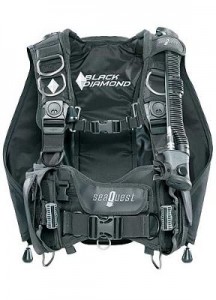 I had a chance to get in the water with the new version of the Aqualung Black Diamond BCD. I’ve mentioned elsewhere here, that I dived the original Seaquest Black Diamond BCD for many years and liked it a lot.

There are some refinements like the shoulder buckles that absolutely make the new Black Diamond fit better than the original. That’s reason enough to make the switch in my opinion, but the major improvement is the “Surelock” weight integration system.

The original used a Velcro flap that never quite felt snug. The weight in the pockets would always move forward about an inch from behind the Velcro closure. The major problem though, was that the weights had to be loaded a certain way or they would slide out altogether and hang from the flap entirely. I learned quickly how to load weights in it and was just glad it was weight integrated at all.

Enough about the old one. Overall, the Aqualung Black Diamond is a great BCD. It’s tough, looks good, fits well and works perfectly. It’s also a great choice for divers using multiple exposure systems with the need for a single BCD.

Unique to the Black Diamond is an adjustment system that makes it possible, in essence, to change the actual size of the BCD. Basically, what they did was to use screws and grommets to attach the cummerbund. Changing the size simply means moving from one set of holes to the next. It’s simple and it works.

What I don’t like about the Black Diamond, and what made me choose the Aqualung Balance instead, was the velcro cummerbund. I much prefer simple 2″ webbing and a buckle, but that’s just a personal choice.

In my opinion, the Black Diamond is a little bit in vague territory with regard to it’s purpose. The Black Diamond was one of the first ever, fully integrated, rear-inflation BCDs with a full compliment of beefy d-rings, etc. That made it very appealing to more serious divers with a need for the additional attachment points, etc.

Today, I think most divers who move that direction will eventually be diving a buoyancy system that offers even more configuration options like a plate and wing, or something similar. Personally, I use my BCD pretty much only for teaching. The rest of the time, I have plates and wings that I configure for whatever dive I’m going to make.

In a nutshell, I do believe that the Aqualung Black Diamond is a top-of-the-line BCD and no one would make a bad decision in buying one. It is more comfortable than the original, great in the water, and made to last for years and years. For sport divers who prefer the wide velcro cummerbund and have a need for the additional attachment points, the Black Diamond is ideal.

But, if you’re a sport diver beginning to make the move into technical diving, it probably makes more sense to wait and let your tech diving instructor(s) help guide you into a system that is more appropriate for that type of diving.

For the traveling diver, I think A lighter weight BCD may be a better choice. Again, it’s great BCD, but falls in between the needs of two types of divers, so I am more hesitant to recommend it than I would have been a few years ago.