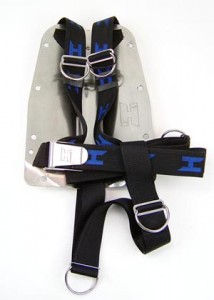 Even though I enjoy poking at DIR diving purists, I do respect their commitment to the sport, safety and dedication to training and fitness.

That said, I do not agree that you must live, breath and train DIR to be considered a competent and safe diver. One example (there are many) of a DIR requirement that is not appropriate for every diving situation is the Hogarthian,  single webbing harness.

I spoke recently with a very well respected (major-league, well-known, world-wide acclaim kind of guy) dive trainer related an experience he had in the last few weeks that demonstrates how single-minded, only-one-right-way thinking can get you killed. If you know me, you can guess who it is, but I don’t think it’s my place to mention his name.

He was training a group of fire fighters from a major city to safely dive under ice. All of these divers were required to be DIR as standard practice for the dive rescue team. For those who may not be aware, no shoulder releases are allowed for DIR compliance, so none of these divers used them.

The problem was that the ice, while plenty thick to support the weight of the divers prior to entering the water, getting out with full gear was impossible. The ice would just crumble under the force of such heavily weighted divers pushing against it.

Under that circumstance, the standard protocol is to remove the rig in the water to reduce the stress, get out, then remove the dive rig separately. Big problem. Not one of the divers could get out of his harness while in the water. They were all effectively trapped.

Of course they eventually managed to extricate each other from the icy hole, but it was such a big problem that they immediately repealed the DIR mandate within the department. Just thought some of you might find that interesting.