Dive Gear Express caters to technical divers. You can buy everything from deco bottles to doubles, but in many ways it’s the small stuff that keeps us coming back. I’ve been told Dive Gear Express is the largest supplier of stainless steel bolt snaps in the diving industry. Similarly, gauges, custom length hoses, spools, inflation systems, plates/wings, webbing, d-rings and just about any other technical diving essential is always available and priced fairly. 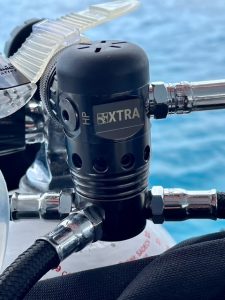 As a side note, DGX Gears offers a lower-priced diaphragm regulator called the D6. I will write about that one in a future post.

The DGX Gears XTRA regulator is amazingly well-priced. Given that, the only expectation I had was that it would be “good for the money.” You can order it in a number of configurations, including pre-assembled kits for sidemount divers and doubles. All are DIN regs.

For diving a single tank, the company’s recommended configuration is to use a standard length hose with the second stage on a necklace as your alternate. Your primary second stage is on a 36” to 40” hose with a swivel where the hose attaches to the second stage itself. The longer hose can be routed under your arm. In the event of an air sharing situation, you would donate your primary and switch to the alternate hanging under your chin. The rationale is that an out of air diver is unlikely to wait for his or her buddy to donate their alternate—instead, taking yours.

My understanding is this is the DIR way of configuring single tank, recreational dive gear. Except, they use a 5’ to 7’ “long hose” as a primary. I’m not convinced the long hose enhances safety in any way, but feel free to argue that point in the comments.

I only mention all this because you’ll be offered choices should you choose to buy a DGX Gears regulator. This is true if you buy them configured for doubles or sidemount diving as well. I love this because all of my regulators use my preferred length hoses. As a consequence, I have paid for a lot of standard length hoses that sit around unused. 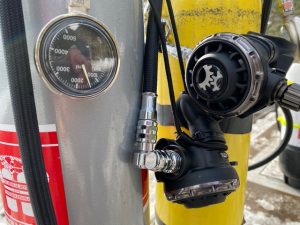 The regulators themselves are beautiful. They have the look and feel you’d expect from any premium top-name regulator. The obvious attention to fit and finish is confidence inspiring. The regs arrived the day before I would be leaving for Cozumel, so I decided to have a buddy bench test the internal pressure, etc. As expected, everything arrived perfectly in spec.

Over the last couple months, I’ve done about 40 dives using the DGX Gears XTRA in various configurations. After Cozumel, I spent a week in Roatan, but neither location is very demanding on a regulator. The real test to me is our local water, Lake Tahoe, which was a cozy 40 degrees Fahrenheit the first time I got to dive the DGX regs in the cold.

I took advantage of a two day break in Wintery weather to do a series of dives. The first were recreational back-mount dives. A free flowing regulator can be a serious hazard, so I kept relatively shallow for the first day’s dives. A lot of regulators perform fairly well in the cold, but once a free flow begins, additional cooling from rapidly expanding air makes it impossible to control.

At the end of my dive, in about 5 feet of water, I turned my alternate mouthpiece up and depressed the purge button. As expected, the regulator free flowed immediately. To my surprise, the free flow stopped when I turned the mouthpiece down! Very few regulators will do that in water this cold. Most regulators, even much higher priced ones, will free flow until the tank is empty or the valve is turned off. 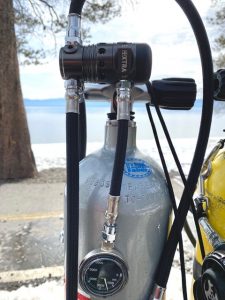 Having proven to myself that the DGX Gears XTRA regulator won’t free flow uncontrollably in extreme cold, I felt comfortable going deep. My assumption is that deep dives on air are more demanding on a regulator than deep dives using trimix. I base that on the fact that helium is far less dense and is known to reduce breathing effort at extreme depths. I suppose I could calculate the actual gas densities for various mixes at extreme depths, but I’ll save that for another day…

It is a rule in technical diving never to take untested or new gear on a technical dive. So, I worked up a series of air dives starting at 130’ without a decompression obligation, down to 180’ requiring significant decompression. Another “rule” is to limit your END to 130’, or even 100’, depending the discipline. Nevertheless, these were air dives. Feel free to opine about the safety of diving air to 180’ in the comments.

As mentioned, the first “deep” dive was to 130’. At that depth, the temperature was 39 degrees. I spent 10 minutes at that depth, then worked my way up a slope for a total bottom time of just over 30 minutes. As expected, breathing effort was minimal and I had no issues with free flow.

The same was true for the deeper dives. Since then, I have conducted quite a few deep-ish dives using DGX Gears XTRA regulators. Given my experience, I trust them for serious dives. I can’t say the same for a lot of regulators on the market. At least, for extreme cold water.

I don’t own every regulator on the market, and I certainly haven’t dived with them all. However, I have used a lot, so I am going to offer a few opinions. Again, if your experiences are different, by all means, chime in with a comment. The following observations are based solely on my individual experience. Also, I’m only listing regs I dive with often, and that I own.

This is as close to the de facto standard for technical diving regulators as you can get. They never fail. They breath like champions at all depths with any gas. Parts are available worldwide if you were to need them. I would be quite happy if this was the only regulator on Earth.

The port locations makes sense and configure well for recreational diving, doubles diving, sidemount diving and deco bottles or stages. Some would argue that such a high performance regulator is overkill for deco bottles, but I’ve had deco regs free flow enough times (see Hollis below) to prefer them.

Following the “too good for deco regs’ concept, Apeks makes their O2 Clean version with the XTX40 rather than the XTX50. I think the only difference is the fine tune knob is absent on the XTX40 second stage. I’ve never missed it.

I can’t tell a difference in performance between the turret version and the standard DS4. I bought this version by accident. In general, I prefer fixed port positions.

The next time I get in the water, I will dive sidemount using this regulator on one side, with the DGX Gears XTRA on the other. Based on my previous dives, I expect the breathing effort and free flow resistance to be similar, which says A LOT about the DGX regulator at less than half the cost!

It should be obvious by now I am a big fan of Apeks regulators. In case you don’t know the Tek3 set is a matched pair (left/right) version of the DS4 with all ports pointing downward. They are intended for diving with doubles. Routing the hoses downward keeps the tanks valves and isolator clear of unnecessary clutter.

Performance is identical to the other DS4/XTX50 combinations.

I have found the breathing effort and cold water performance of the DGX Gears XTRA Regulators to be surprisingly comparable. To be fair, I have made thousands of very demanding dives using Apeks regulators, compared to dozens of total dives using DGX Gears. I am particularly interested to see how the DGX Gears finish holds up compared to the traditional chromed brass of the Apeks. Looks good so far… 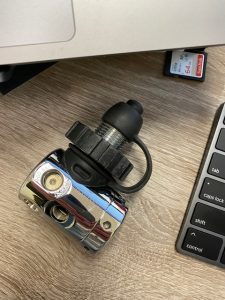 This is a perfect example of why I use high performance regulators for my deco bottles. I bought this reg specifically for use with 40%-50% deco mixes. Typically, that means the time from the 99 or 70 foot gas switch up to 30 or 20 feet when I’m getting onto 80% or pure oxygen. Even on extreme dives, this usually isn’t more than 15 to 20 minutes.

On type plus side, the first stage is compact seems to be built pretty tough. The second stage is simple.

What’s not so great is the regulator free flows easily, even when it isn’t all that cold. Sometimes I travel with it, but mostly the first stage sits on my desk stripped of hoses and gauges I cannibalized in favor of regulators that are more reliable.

These are allegedly higher performance regulators than the DC4/212. They still suck in cold water. Breathing performance is good enough. I don’t feel huge amounts of resistance, but all of my other regulators are noticeably better. These also make random noises—usually different pitched squeaking on inhale. It would be a comfort if they both sounded the same, but they don’t.

On the plus side, these are also compact, no-BS regs. They simply aren’t high performance regulators. Nevertheless, these have been my sidemount kit for way too long. If/when one freezes, I shut it off and let it thaw enough to stop the free flow. It’s really a stupid way to dive.

There’s no contest. The DGX Gears are superior to my Hollis regulators. Period. That said, mine are discontinued models that I don’t believe ever were meant for cold water. But, even in warm water, breathing performed is better with the DGX Gears regs.

I intend to keep diving the DGX Gears XTRA as my sidemount regulators for the foreseeable future. I like them a lot. The ONLY thing I would change is I prefer fixed position ports over the rotating turret. I’m also watching to see how the finish holds up.

The Atomic T-series regulators breathe better and have a longer service interval than most regulators, including the DGX Gears XTRA. However, THEY ARE REALLY EXPENSIVE!! If you were to configure a sidemount kit using Atomic Titanium (T3) regulators, plan on dropping around $4,400. DGX Gears XTRA regulators will run you less than $800 for the same configuration.

Personally, while I love Atomic titanium regulators, I feel they are entirely inappropriate for technical diving. Titanium is a sparking metal, so it’s never safe to use with oxygen concentrations over 40%. If I ever have to change deco regs underwater, I don’t want my only available replacement to be so eager to catch fire.

That said, I do have one that I use for travel because if the weight. I even have the stupid-expensive titanium DIN to Yoke adapter for the same reason. Together, they shave about 4 pounds out of my gear bag.

Yes, the Atomic is better, but at easily 4 times the price, that they compare favorably at all is impressive. Atomic, being titanium, has an Achilles heel—that catching fire problem—so, it’s not really an option for technical diving in my view anyway.

At this point, I have made about 60 dives using the DGX Gears XTRA Regulator. The majority have been in warm water, tropical locations, with about a dozen in extreme cold and to much deeper depths. I have also had other technical diving instructors dive with them and offer their impressions.

The consensus is, like everything Dive Gears Express sells, DGX Gears XTRA regulators are not only a great value, but great gear. Given my experience so far, I have no hesitation recommending them to even the most demanding diver.