Is DIR really “doing it right” for recreational divers? 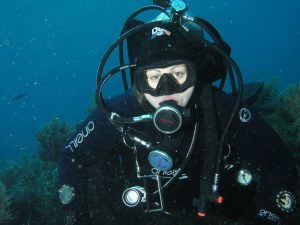 About a two years ago, some of my dive instructor buddies were at a very popular California dive site. As they were gearing up for a dive, chaos erupted just outside the entry point. A diver was missing.

Very quickly, available divers began the search. The missing diver was a girl in her early 20’s, who had only recently been certified.

Before reading on, keep in mind, I was not there. ivexterm precio similares فريق لوس انجلوس The details I have came directly from the people involved in the rescue and resuscitation efforts. However, even direct witnesses get details wrong.

My intent is not to recount the events surrounding this accident, but to call into question the DIR training philosophy for new open water divers.

The victim was found on the bottom not far from where she entered the water. My understanding is that she had air, but her regulator was out of her mouth. It was later discovered that she had logged very few dives, and this was her first dive in a brand new drysuit.

Nothing about this is unique so far. عمر واين روني It shouldn’t surprise anyone that inexperienced divers suffer the burden of an increased accident rate. This is especially true where new equipment (like her drysuit) is involved. However, two things made this dive unique.

First, rather than the typical recreational BCD, this victim was equipped with a backplate utilizing a single web, “hogarthian” harness system. Additionally, her primary regulator was on a 7’ long hose. كم عدد القوارير في البولينج Her secondary hung from a necklace. She also carried a single, bootless pressure gauge. In other words, she was DIR all the way.

Second, was the disturbing fact she had been carrying a GoPro camera that was running for the duration of the accident.

My friends had the unfortunate duty of performing CPR on the victim the second she hit dry land. st johns wort and ivermectin By now, I’m sure you guessed those efforts failed.

The real question is what happened below the surface that led to this girl’s tragic death. I forgot to mention, her drysuit was flooded.

The victim’s GoPro footage later revealed that she had been face up on the bottom for quite some time. It seems her drysuit had taken on enough water to cause her to lose buoyancy. I’m not sure if she failed to drop her weights, or wasn’t wearing any—a so-called “balanced rig.”

Once on the bottom, the video chronicled her unsuccessful struggle to get out of that single-webbing harness. She had options. Her gear was functional, so she could have inflated her wing. Even flooded, her drysuit probably would have maintained some buoyancy. If she was wearing ditch-able weights, she could have dumped them.

Before writing this, I did some background research to verify what proponents of DIR for recreational diving are saying. para que sirve la ivermectina tabletas 6 mg en humanos One author promotes recreational DIR based on the “advantage” of a single system that can grow with the diver. He cites the “inevitable” reality that all divers eventually become deep divers, or wreck or cave penetration divers.

He points out that the newly minted recreational DIR diver will one day wish to carry a “40 cu foot” deco bottle. He goes to the trouble of explaining that this is NOT for the purpose of carrying additional gas, since backup gas is as close as your buddy.

The fact of the matter is this is bull-crap. No one, including leaders in the DIR/GUE system would condone making accelerated decompression dives without bottom gas redundancy. And the vast majority of recreational divers never take an interest in deep penetration dives.

Did DIR play a role?

The narrative aside, I believe DIR played a role in this girl’s death. Millions of divers conduct millions safe dives every year. There are accidents, but the majority of them turn out to be medical incidents that happen to take place underwater.

The flooded drysuit may have been the triggering event. If so, jettisoning her scuba unit would not have been the appropriate action. However, in that moment, in her panicked state, that’s what she fixated on.

When she felt the need to get out of her gear, the one-piece harness made it impossible. Again, it is the wrong course of action, but had she been held in by Velcro and a plastic buckle, her instinct to bolt probably wouldn’t have killed her.

She wasn’t very deep, and people we around. Even a severely flooded drysuit is neutrally buoyant, so she could very well have made it to the surface. From first person accounts, I suspect the suit had some air in it, so it may even have been buoyant.

In this case, the wrong action may still have had the right result.

The mental state of a panicking diver

A panicking diver wants one thing: Air. Since time is very limited, the diver’s first instinct often leads to the only action taken. The one thing all divers know is that air is up, so the first and often only instinct is to get to the surface at any cost.

I don’t think the DIR system is bad. Heck, aside from the long hose, my own system for recreational, single tank diving is pretty much the same. I honestly don’t have any way of knowing if the DIR gear configuration was a factor in this girl’s death. But, I suspect it was for the reasons I’ve outlined.

DIR didn’t have its roots in recreational diving. That adaptation came later. Personally, I am a minimalist for all the same reasons as DIR purists, but I also have 4,000 dives behind me and train constantly.

One final thing. A primary tenant of the DIR system is the team concept. A DIR requirement is that it is unacceptable to dive alone. So, I have to ask, where was her buddy?

DIR, PADI, NAUI, TDI/SDI, GUE… All advocate team diving or the buddy system. In the end, no one was around to help.