But, DAN research clearly shows the majority of diver deaths could be prevented. 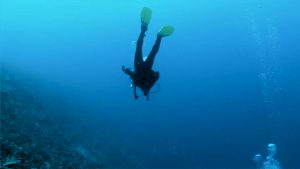 As a diving instructor, the worst thing imaginable is the thought of a fatal incident involving a student. I obsess over diving safety, not only during the dive but before and after as well. I try to be role model by planning meticulously, and demonstrating to students and other divers that being aware and in control not only prevents accidents, but also makes diving more fun. And it’s alright sometimes to let them get the best paddle boards for racing, which can be fun and would encourage solidarity among them.

This presentation underscores every diver’s need to understand the conditions and events that lead to tragedy. It should come as no surprise that running out of air is still the leading casue of diver fatalities.

Many times I’ve read that the majority of victims of diving accidents not only ran out of air, but died with their weights on. Problems with equipment is also a frequent theme in diver deaths. In the example detailed in the video, both were true, leading to a double fatality that almost claimed a third victim.

Also, not surprisingly, experience plays a key role. Aside from the risk of complacency, active divers tend to be under represented as victims.

Finally, something that stands out to me is the vast majority of deaths seem to occur during the first dive of a trip. Most often, that dive comes after a year or more out of the water. And, many of these “victims” are attempting to dive with known medical conditions.

Two years ago, I personally pulled a diver from the water whereby all three of these conditions were true. Despite our immediate action, there was no saving him. We later learned he’d been battling congestive heart failure for years.

Scuba diving is deceptively easy, but when things go wrong, they go wrong fast. When life support is involved, the error chain is incredibly short. Please take a few minutes and watch. Even if you don’t learn anything new, presentations like these help keep diving safety an ever present goal.