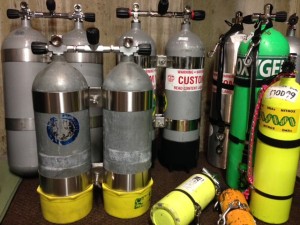 My first set of scuba tanks was a pair of “tiny doubles” (1800psi 38’s, or so I’m told). I suspect they are actually 45’s, and, when filled 10% over, 50’s. They were manufactured by ScubaPro in 1972, but I got them used about 10 years after that. I was really excited to get them because they not only looked cool, but fit me much better than an AL80, or a steel 72. ivermectin pferd The tanks had a single outlet manifold with a J-valve, which were still common at the time. Today, they call that a suicide manifold because of the lack of redundancy. dermatologist ivermectin nyc

Sometime in the early 90’s I decided to up the volume a bit by replacing those trusty steel 38’s with aluminum 50’s, which were much more common by then. أجويرو Trouble is, double AL50’s are a completely different animal underwater (they suck, actually). heeler reaction to ivermectin And, within months of making the switch, Sherwood introduced the Genesis line of high pressure DIN tanks. how to use ivermectin pour on for chickens Since then, those have been replaced in the market with 3442psi cylinders, but you can still find 3500psi Genesis tanks pretty easily.

I still have a bunch of  Genesis cylinders, all of which I continue to dive. They are heavenly in the water. Meanwhile, my lowly 1800psi 38’s (? 777 ) have been just sitting for decades. I used them individually in the pool for teaching Open Water classes for a long time, but even that stopped when I picked up a couple Genesis 65’s, which are easily 6 inches shorter.

These days, unless I’m teaching or flying on vacation, I rarely dive singles. Mostly, that’s because the majority of my dives are technical dives. dosis de ivermectina para niños However, in cold water like we have here (Lake Tahoe and surrounding mountain lakes), once you start getting around 3-4 ATA, the rapid gas expansion can cause a first stage to freeze with very little warning.

Early in a dive a free flow at 100 feet plus is annoying. Late in the dive, it can be very dangerous. I dealt with that just a few nights ago. I decided to dive a single HP80. whatbis ivermectin Sure enough, 7 minutes into the dive at 103 feet, it started with a trickle. At a normal ascent rate (30 FPM), I went from 3200psi to 1550psi in just over 3 minutes. ivermectin intravaginal Had that happened later in the dive, things could’ve gotten very uncomfortable.

A few months ago, I read John Chatterton’s blog article, Tiny Doubles. (BTW, John, if you happen to read this, I enjoy reading your blog. Please write more.) In it, he makes a great case for small sets of doubles. He matches his tanks to the type of dive, which often means double 45’s or 50’s. what company makes stromectol In doing so, he never sacrifices redundancy. العب كازينو It also means he is able to dive the exact same configuration for every dive.

Thus inspired (get it? inspired?), I re-banded by 38’s (?), this time with an isolator manifold, and ignored the odd stares I got from my tech diving buddies. موقع مراهنات المباريات In addition to the nostalgic rush I get from being able to dive my very first set of cylinders, they make a very practical kit. One might argue that the capacity is basically the same as an 80, so why bother? The answer is obvious if you recall my anecdote above. Safety.

In diving, safety almost always takes the form of redundancy. Recreational divers carry octopuses or safe second stages, but only rarely pony bottles. On my recent dive, I had an octopus. does ivermectin absorb transdermally? So what? My first stage was frozen. There was nothing I could do but surface and/or share air and surface.

Capacity isn’t the issue at all. I have a SAC rate that averages .35 to .42, so I am rarely the first to run low on gas anyway. Like John, I have larger doubles, but for recreational dives, it isn’t always practical, comfortable or necessary to lug around 170 or even 224 cubic feet of gas. العاب ربح الجوائز حقيقية