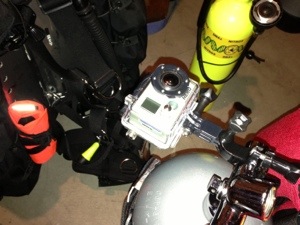 Mounting a GoPro to Scuba Gear

recently got my hands on a GoPro Hero video camera. I honestly never gave GoPro much thought since I am in the media business and use a lot of high end video gear all the time. Underwater, I’ve been shooting with a slightly outdated Sony HD camera in a Light & Motion housing and a pair of mounted video lights for a long time. It’s compact for what it is, but I set a goal recently to be able to travel without carrying any of that, including my MacBook, and just shoot and edit with a little camera and an iPad.

Even with the other camera, the GoPro has made quite a mark as a cheap and virtually indestructible POV cam. After purchasing the GoPro, I did a little research and learned that the Hero 2 shoots blurry video underwater because of some kind issue with the dome port on the standard housing.

Fortunately, the solution is a $40 replacement housing from GoPro that has a flat port instead of the dome. So far, I haven’t shot anything underwater with either of them, so the only comparisons I have are from YouTube, but that’s not the point of this post anyway.

I have been struggling for a while over how I could mount the camera without interfering with my mask or other equipment. I want to shoot hands-free, and be able to create time lapse sequences of entire dives. So, here’s what I came up with.

Using the GoPro’s handlebar mount, I’m able to attach the camera directly to the valve of my old school 3500 psi Genesis 100 scuba tank. This is actually a second generation valve. Unlike the original, it is configured to attach an H-valve or isolator bar, and the extension provides the perfect attachment point to mount the GoPro. And, I can reach it, so I can turn it on at the beginning of the dive and not have to shoot a bunch of video of the sky prior to descending. That’s the theory anyway.

Mounting the GoPro camera to a set of doubles

Doubles are a little different setup. Well, actually it’s the same setup, but a different concern. For technical dives, I love the idea of shooting the entire dive from the diver’s perspective. I’m not sure if it’ll be all that cool shooting dives with the back of my head always in the frame, but that’s something I’ll deal with later. 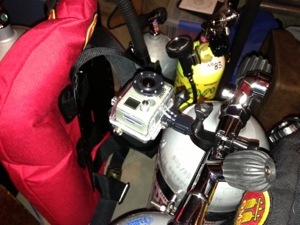 Mounting the GoPro to my doubles isolator bar works just fine, and I can reach it. However, the thumbscrews could potentially impede my ability to control the isolator valve, which is not something I’m willing to risk on a ceiling dive. I’ll try it in shallow water and see if its a problem. My guess, just by looking at it, is yes. 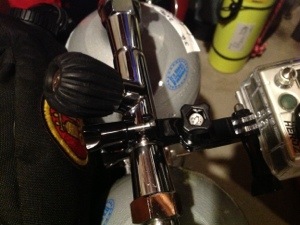 Plan B will be to replace the thumbscrews with stainless hex head screws cut to exactly the right size. That will get the GoPro mount completely clear of the isolator knob. I could also use a remote isolator knob, but that means more crap on my chest, and I’m not accustomed to that setup anyway.

The pictures aren’t great but you get the idea. In a week or so, I’ll get underwater finally to see how it all works out. In the mean time, if you have experience with this arrangement or something similar, I’d like to know how it’s working.

2 thoughts on “Mounting a GoPro Camera to Scuba Gear”