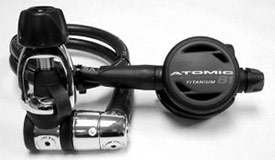 I’ll be the first to admit that a lot of my gear is getting up there in years, but seriously, titanium is cool no matter what the age. I have a couple regulators, an Atomic T1 and a Poseidon Cyclone. Both are great but the Atomic will appeal to a wider range of divers.

For most divers, just about any regulator will do the job. Going deep, the increased air density begins to separate the high performance regs from the rest of the field, but to me the big reason for the average diver to think about going high end is corrosion.

The service interval for Atomic titanium regulators is 2 years. I still get mine in every year or more but, I often get into situations where fresh water for rinsing gear isn’t so available. I have complete confidence that my regulator will not fail, regardless of how badly I punish it. I wouldn’t feel the same with most other regulators on the market.

My reg is over 11 years old and it is still the coolest thing going. I doubt that I’ll ever buy another one, but if I had gone with something else, I’d very likely have replaced it already and would still want the Atomic. So, my advice is to go for it. You’ll be glad you did.